How we Managed on a Cruising Holiday with our Toddler

We were a little worried when we booked to go on a Pacific Island cruise with our toddler, she had only been walking for a couple of months, but man was she keen! She wasn't just a walker she was a runner, and she was so excited about her new skill of walking and running that she just wouldn't sit still. My main concerns were:

* Rails around the boat's decks, would she be able to fall over them?

* Family meals every night, how would we convince her to sit nicely at the table for hours on end?

* Nap times, would we need to take her back to our cabin for naps twice a day?

* Stairs everywhere, so much potential for her to fall and reminded me of the time I fell on the metal outside stairs of the Interislander when I was a kid:-(

Oh and so, so many more, if there is one thing I'm good at it's worrying! But honestly, I would wholeheartedly recommend cruising with your baby or toddler, we went as a group of 11 aged from 15 months to 70-something years and I think we all had a good time. We were expecting a boat full of 'half dead's and newly wed's, like they always say, but the boat was mostly full of families. Apparently the shorter cruises (ours was 10 days) and cruises during the school holidays like ours was, attract a lot younger clientele, we heard that our boat was 1/3 children. I wouldn't say cruising was all easy, and some of my concerns were founded, for example, I was worried about falls over the balustrade around the deck when someone was holding the baby, but I was imagining that the balustrade would be solid perspex or metal, in reality it was four horizontal pipes, about 30cm apart, totally dangerous not just for toddlers but for pre-schoolers as well. That deck gave me the absolute creeps and I avoided it the whole cruise.

I've got a few tips for cruising with your babe:

* You might not want to book a cabin with a balcony, it's just one less thing to worry about if you have an inquisitive toddler who loves climbing and a balcony with easy-to-push-around furniture. You'll save money too, bonus! 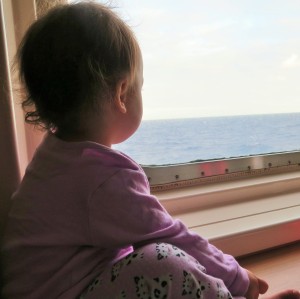 * Our cabin was on the lowest deck, on the outside centre of the boat (so we had a small window), my husband said that we were like Leonardo Di Caprio in Titanic, but it was actually a really good position, especially if you're prone to motion sickness, as there was hardly any rocking down there.

* Most cruises have two dinner sittings, at six and eight thirty PM (or so), if you're planning on eating with your children it's probably best to book the earlier one. You'll eat dinner at the same time, at the same table, and even with the same waiters for the duration of the cruise, and they'll probably seat you near other families so you can all be loud and annoying together. We weren't offered a kids menu, but towards the end of the trip I noticed a few other children were eating off one. The younger ones in our group (15 months, 12 years and 14 years) ate from the adults menu.

* Take a few toys and books, but you can borrow more from the kids club. Our kids club wouldn't allow children who weren't toilet trained, and strangely, toddler play time was 11.30am, the time when pretty much all toddlers are napping, so we only made it there once.

* Take a stroller so that your baby can have one nap in it each day, saving you from going back to your cabin each time, make sure it's a stroller that folds up small (saving your precious space in your cabin) but has a good recline, like our Livi or Marathon stroller. 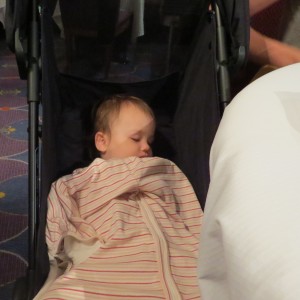 * You'll be eating lots of meals, so you need lots of bibs, we loved theKushies waterproof ones, because they fold up small in your handbag (or even husband's pocket) and you can wash them in your cabin's basin and hang them out to dry overnight. 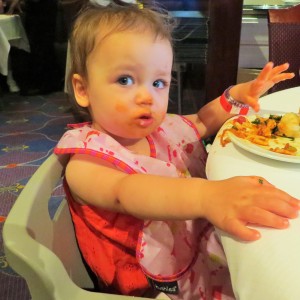 * Food, food, food, if there's one thing a cruise boat has a lot of it's food! I was really surprised, the quality was amazing! I was expecting family restaurant quality food but it was more like fine dining restaurant quality, and plenty of it! You won't have a problem finding something to suit your child, but if they're on puree you might need to take a few jars, cans or pouches with you.

* If your toddler is on cows milk, make sure you grab a couple of small cartons of milk at breakfast, for baby to drink during the day, but if you forget, don't worry, it's always meal time somewhere on the boat! You can store the milk in the fridge in your cabin.

* Things to do, there are just so many! We thought the crew and passengers were all really friendly, my advice is get involved when you can, and if someone offers to look after your child(ren) while you go and have a massage or a facial, let them! 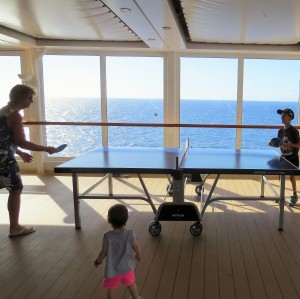 * Outfits, you'll need loads. Apart from your normal day clothes you and your child will also need to dress for dinner each night. My suitcase was huge and I thought that I had plenty of outfits, but we ended up having to have our laundry done ($$$).

* We tookKushies washable swim nappies but children who weren't toilet trained weren't allowed to swim in the on-board pool (apparently that's a common rule in the US?) so we only used them at the beach. 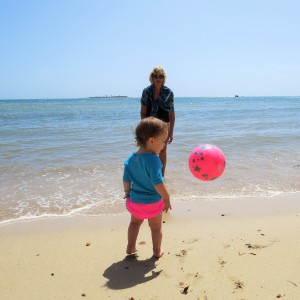 We were just so pleasantly surprised about cruising, we really didn't think that we would have as much fun as we did. As far as family-friendly holidays go, cruising has to be right up there, it's relaxed, easy, and feels safe. One of the best things was that there was no cell-phone coverage on the boat, and wifi was about a million dollars an hour, so everyone on there is completely switched off from technology and relaxed. You don't realise how stressful all that stuff is until you get away from it, and being technology free really allows you to make the most of family time.

I'd love to hear your thoughts on cruising with your baby or toddler!